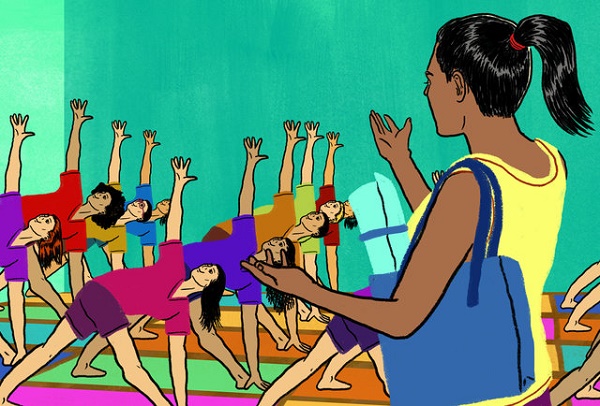 A few days ago I entered a yoga and meditation class three minutes before it was scheduled to start. I walked around the packed studio hoping someone would make room for me but it seemed the laminated card I held in my hand authorizing my presence was falling on blind eyes.  No one was moving. When I requested that we scatter our mats in an effort to make more space, the synchronized group sigh I received was almost impressive. Evidently the class had mastered the art of pranayama but its use slightly misapplied. These were the same people that were momentarily going to sit in prayer position and chant Om, shanti, shanti, a message of peace to all…. I know I shouldn’t have been upset. I shouldn’t have allowed the arrogance and selfishness of others to affect my mental state but it’s painfully difficult to ignore blatant hypocrisy.

When I finally found a spot glued to the back wall, I couldn’t clear my mind. All I could do was stare at my neighbours in disbelief. Decked out in Lululemon, likely fresh off their vegan green smoothies ready to practice an ancient Hindu discipline which, at its core, is about finding a path to enlightenment, these people represented to me all that is wrong with our world today. I wish I could say that it was an isolated incident but, unfortunately, it wasn’t the first time I experienced this sort of behaviour. These people didn’t know my story. They didn’t know that had I recently quit my job and was looking to spend more time practicing yoga and meditation. They didn’t know that I had rushed over after dropping my daughter off at daycare and was excited about spending one hour unwinding. They didn’t know one thing about me except that I hadn’t arrived early enough to find ample room for my $15 yoga mat and that just wasn’t acceptable to them.  Imagine if the class had kids in attendance. What lesson would they have picked up and eventually perpetuated themselves?

The hour ended and while physically I felt better than before, mentally I was extremely disheartened. As I packed up my things, I heard some of the students make reference to the shootings that had occurred just the night before at a Quebec mosque. Their sentiments no different from my own. Words like compassion, acceptance and kindness were being exchanged and although I agreed with all of what was being said, I couldn’t help but feel even more frustrated.  Why? Because it never ceases to amaze me how easily people forget that each one of us has the ability to make this world a better place. We don’t have to wait for dark and traumatic events to take place before we demonstrate empathy and consideration towards others, rather, goodness starts by the smallest of actions like moving your yoga mat for someone else.